-Reservations for 20 guests at 2 tables with Premier Seating

-Reservations for 10 guests at 1 table with Premier Seating

-Reservations for 10 guests at 1 table

-Reservations for 10 guests at 1 table

All Gala sponsors will also be recognized in the following ways:

Catholic Charities recognizes that the Young Adults of our Diocese are the next generation to make a lasting impact in our communities and help Catholic Charities further its mission of providing help to our brothers and sisters in need. After seeing a younger crowd at the 10 Annual Gala, Catholic Charities has decided to once again offer Young Adults (ages 21-35) the discounted rate of $75 per ticket. We hope to see you there! 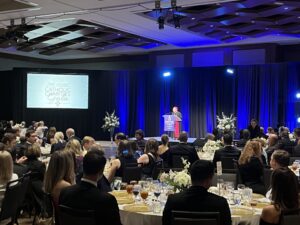 “Charity is putting our faith into practice; it is an expression of how we live our faith.”

Speaking on Perkins’ work, Trish Healy, who along with her husband, John, created the Ignite Award, said, “Mobile Food Pantries can begin to overcome organizational limitations. We can bring food to our neighbors, and it can serve as an example and give hope.” She emphasized that these measures are a step forward in the continuing fight against food insecurity. “Because of Lisa’s aspirations, and through this first Ignite Award, Catholic Charities will begin to bridge gaps in hunger and create paths to food security.”

Echoing these sentiments, Perkins said, “I am excited about the opportunity the Ignite Award creates for Catholic Charities. This initial Ignite Award will serve as a catalyst to create a network of mobile food pantries in our diocese.”

To wrap up the speeches for the night, the evening’s emcee Ken Smith of WRAL announced the raffle winners as well as the winners of the Premier Silent Auction Item, a salmon fishing excursion to Nushagak River Adventures Lodge in Bristol Bay, Alaska. As the owner of Nushagak River Adventures generously donated an additional two fishing trips to the Gala, the top three silent auction winners will all be traveling to Alaska!

Since its inception in 2011, the Annual Gala has raised nearly $2 million to allow Catholic Charities to serve our neighbors in need. The event was first held in the Cardinal Gibbons High School gymnasium in 2011. Over time the event outgrew this space, attracting over 400 guests a year, and was moved to other locations including the Downtown Raleigh Marriott and the Raleigh Marriott Crabtree Valley. Catholic Charities has been honored to have speakers such as former Duke Football Coach David Cutcliffe and former President and CEO of Catholic Relief Services, Dr. Carolyn Woo, share in this tremendous event. 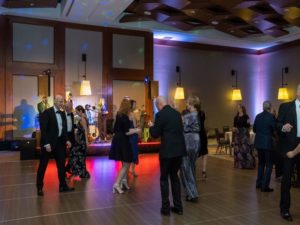 © 2023 Catholic Charities of the Diocese of Raleigh.

Designed and Hosted by S&A Communications.